Neighborhood Fiber Company CEO Karida Collins was raised in a Southern family that prioritized social justice and giving back. “My mom was a lawyer at a public hospital helping the uninsured and underinsured,” she says. “My original plan was to be a lawyer and continue helping people through legal representation, but I got to George Washington [University] and hated those classes.” Karida switched to American studies in graduate school but found that what she loved most was knitting, processing, and hand-dyeing her own yarn. “Starting a business seemed like the right thing to do because working at a yarn store didn’t feel like enough—I mean, at the time, my brother was finishing up a degree in criminal justice and on his way to Yale Law!”

A decade later, Karida moved the Neighborhood Fiber Company (NFC) to Baltimore, where her mother had grown up and she herself had spent summers visiting her grandparents. She was able to secure a subsidized live/work space at the new City Arts Building, and within a few years opened a separate studio and shop in the Bromo Arts District. By 2015, business was booming with orders from shops and wholesalers around the world, as well as within Baltimore where Karida felt fully at home. Then, Freddie Gray was killed in police custody and the need to do something for the city she had grown to love was palpable. “I’m good at two things: dyeing yarn and asking for money,” says Karida, “so we created our first Color for a Cause.” Named Sandtown-Winchester, the series of deep periwinkle yarns raised more than $10,000—all of which was donated to BCF’s Fund to Rebuild Baltimore to support community-led programs following the protests.

In summer 2020, after the killing of George Floyd spurred worldwide protests, friends and loyal customers looked to Karida again. “We raised $10,000 in six hours and $25,000 in 24 hours,” says Karida proudly. “The money kept flowing and I really wanted it to hit $100,000, so my mom topped it off at the end. That’s my family.” At her accountant’s suggestion, Karida used the funds to establish the NFC Momentum Fund at BCF. Today, the fund makes grants to a wide range of social and racial justice organizations, from Baltimore Safe Haven and Black Girls Vote locally, to Black Lives Matter and RAICES (Refugee and Immigrant Center for Education and Legal Services) nationally. The Neighborhood Fiber Company continues to create specific colors for certain causes that flow through the fund, and is known for its lines of Baltimore-inspired products. An entire rainbow of colors are named after neighborhoods like Charles Village, Mondawmin, Park Heights, and Roland Park, and Karida has also created a speckled series named after Baltimore-based artists like Joyce Scott, Ernest Shaw, and Amy Sherald. Altogether, her products are designed to showcase the city’s vibrant, hopeful culture in sharp contrast to negative national news coverage. “Baltimore is a city where you feel like you’re doing good just by living here and people need to know that,” says Karida. “Now, I tell everyone Baltimore is my pyramid scheme. I bring someone, they bring another, and pretty soon we’re full.”

Donate to the
NFC Momentum Fund

If you would like to donate to the NFC Momentum Fund, please press the button below. 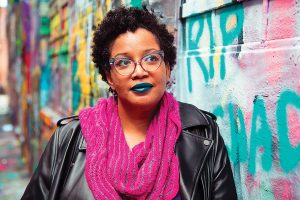